Brown Rat Rattus norvegicus
STATUS : Widespread and common in a range of habitats. 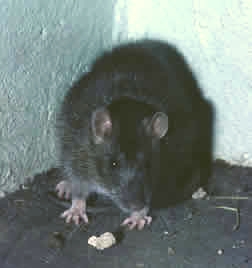 Introduced to Great Britain in the 1720s and spread rapidly. Now widespread in Derbyshire, and probably very under-recorded. Local authorities and people generally tend to be reluctant to Admit to the presence of rats. Brown Rats are an exceptionally adaptable species and they occur in a wide range of habitats: urban environments, sewers, farms, ditches, lakes and rivers, hedgerows, fields and woods. They seem to be rare or absent on high moorland. They are also versatile feeders, easily attracted to food from bird tables, pheasant feeders and bread thrown for ducks on park lakes. Brown rats swim well and may prey on freshwater mussels, leaving the shells with characteristic incisor marks as evidence.

Occasionally preyed on by barn owls, and by mammalian predators such as fox and polecat. There are no obvious threats to their status. On the contrary they are widely regarded as a pest species and local authority pest control departments control them on a standing basis, mainly through poisoning. They are also trapped and poisoned by farmers, householders and gamekeepers. Cream, white and sandy coloured rats were caught at Calke in 1913-14.