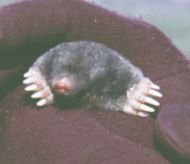 Native and widespread throughout the county. Their status seems to be stable. Moles are uncommon in dense woodland and they avoid wetlands for obvious reasons. Moles are also rare on peat moorlands, where earthworms are few, but they follow valleys, roads and shooting tracks up onto the moors, taking advantage of narrow strips of suitable soil. Molehills are regularly seen in the Upper Derwent Valley, Snake Pass and Woodhead Pass, up to elevations in excess of 550m and Clinging & Whiteley (1985) report a sighting of a live mole at 2000 feet (609m) on Bleaklow. Moles are widely regarded as a pest because of perceived damage done to lawns, grasslands and pastures, and possible contamination of silage. They were also formerly killed in large numbers for their fur – the original moleskin. Professional mole-catchers are now non-existent in the county, but moles are still trapped in large numbers by farmers, gardeners, and green-keepers and dead moles are still occasionally seen strung up on gibbets (see photo). Molehills are one of the most familiar mammal signs, and form the main source of records, but the animals themselves are rarely seen.

Pale and brownish specimens occur sporadically. Individuals described as silver-grey streaked with yellow, bluish-grey, silver-grey and one with an orange-coloured throat were all obtained at Calke and Ticknall in the late 19th and early 20th centuries. [Old local name: moudiewarp, moldiwarp].

More about the mole