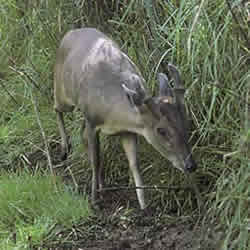 Introductions made to the UK in 1893-94 at Woburn, Beds, involving both Indian and Chinese muntjac. The first recorded occurrence in the county was at Matlock during the 1948 deer census (Lever 1977). A young male muntjac seen at Normanton Recreation Ground on 28 February 1972 was found dead in a nearby street the day after (Branson 1996). Both of these animals were described as Indian muntjac Muntiacus muntiacus at the time, but it seems more likely that these were misidentified, and like the others in the county are of the Chinese species.

Muntjac are now well established in the south of the county around Calke and Ticknall. One was found dead on the road in Ticknall village in spring 2004 and damage to gardens has been reported in this area. They have been seen at DWT’s Carvers Rocks and Spring Wood reserves. Muntjac colonised the suburban fringe of south Sheffield in the 1990s (Rotherham 2000) and there are recent records from locations in north-east Derbyshire including Whitwell Wood. There are also a small number of scattered records, including from north of Ashbourne. It is likely that muntjac are expanding their range in the county, but slowly. Although their spread is of interest to mammal-watchers, experience from other parts of the UK shows that they can cause considerable damage to woodland flora, especially bluebells and other plants of the woodland floor.