Some time around 1970, a Derby vicar watched three otter cubs and their mother playing in the River Derwent at the bottom of his garden, where he regularly found footprints on the muddy banks. It was to be another thirty years before otters would breed in Derbyshire again.

The story of the otter's decline in the UK is a well known one. A background of declining water quality and persecution were already having an effect on otter populations around the country during the 19th and early 20th centuries. Then, in the late 1950s, the introduction of persistent organochlorine pesticides lead to a sudden and dramatic crash that continued right through until the end of the 1970s. By the time of the first national survey in 1977-79, otters had disappeared from almost all of England, with the exception of the south west and small remnant populations in East Anglia and the far north east. Large parts of Wales were also otter-less, as well as parts of the Scottish lowlands.

This summer saw the publication of the results of the Fourth Otter Survey of England, carried out by the Wildlife Trusts and the Environment Agency during 2000-02. 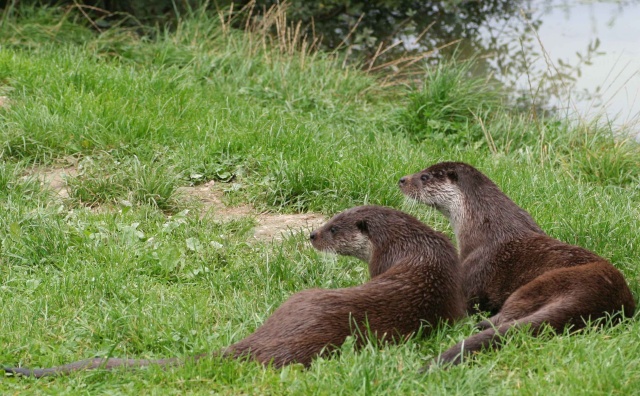 The biggest news from this report, based on survey work carried out by The Wildlife Trusts and the Environment Agency between January 2000 and February 2002, was that the national otter population continues to grow. When comparing the original sample of 2940 sites around the country that were first surveyed in 1977-79, there has been an increase of 527% over the last 25 years.

In recent years, much of this increase has been happening here in the heart of the country, as the populations from the Welsh borders expand to meet animals from the reinforced populations of eastern England.

Here in Derbyshire, a dedicated team of volunteers with the Water for Wildlife Project have been monitoring our own expanding otter population for the last three years

By checking for spraints and tracks under specified bridges across the county's rivers, we've been able to watch as the otter population has become stronger on the Trent and the lower sections of the Derwent and Dove. Although still quite few and far between, it seems that these 'lower Derbyshire' otters are consolidating their range, with signs being found with increasing regularity at their favoured spots. It now seems certain that otters are once again breeding successfully on our lowland rivers, even if we can't be sure exactly where the animals are!

Signs have recently been found on some of the smaller watercourses, with regular animals along both the Hilton and Henmore Brooks. Occasional 'positives' have also come from the Erewash, Amber and Wye and a dead male found just across the Cheshire border last autumn, together with two likely footprints more recently, suggests that there may be otters back on the Goyt catchment.

Unfortunately, the state of play in the north of the county is something of an unknown quantity. During the previous national survey, in 1993, there were a spate of positive signs on the upper Derwent and the Wye. Since then, nothing. Was this just a single transient animal that had recently moved into the area but which was unable to find a mate and moved on again? If so, why have no more followed in his wake? Or maybe there are still otters up there and it's just that our surveying and monitoring work is missing them. It's certainly true that the most regularly checked sites have always been down in the south. In which case, why are we not receiving more sightings from anglers, who are reporting plenty of water voles and mink in the same areas?

Without the time or resources to embark on another full survey of the county, we must rely on our monitoring volunteers to keep an eye on our otters. In the autumn, more monitoring points will be identified and, hopefully, more volunteer otter spotters recruited to increase the number and frequency of sites checked. If you would like to get involved with otter monitoring, or if you have any positive records of otters in and around the county, no matter how old the records are, please contact the Water for Wildlife Project at the Derbyshire Wildlife Trust.