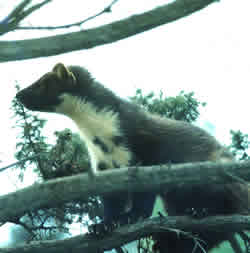 Native but disappeared from the county some time during the 19th century, along with most of England. Current status in Derbyshire is unclear. Information on former occurrence is sparse. Pilkington (1789), in summarising the mammals of the county, said that it was hardly necessary to add that pine martens were present. This implies that they were at least relatively widespread towards the end of the 18th century. The Victoria County History (1905) said pine martens probably disappeared from the county by about 1850, but that vagrants may have occurred in more recent years. The author added that it was mainly found in the wooded parts of the north and the valleys of the Dove and Derwent and cites a writer in 1841 saying it was ‘plentiful in the fir woods that clothe some of the hills of Derbyshire, especially near Buxton’. The VCH also states that Pine Martens also wandered into south Derbyshire from Needwood Forest (Staffordshire) and Charnwood Forest (Leicestershire). Two very old, but undated, specimens in Sir John Crewe’s collection were said to have been taken at Calke.

Relict marten populations survived in the Lake District and Snowdonia and a few other localities in Northern England including south-west Yorkshire. There were confirmed pine marten records from the Yorkshire sector of the Peak District, close to the Derbyshire border, as recently as 1926 and again in 1931, when a young female was obtained near Bolsterstone, and is now in Sheffield Museum (Howes 1985). It is generally assumed, that these were of wild origin as opposed to escapes or introductions.

Sporadic reports of pine martens from the same general area on both sides of the county boundary in the Upper Derwent Valley and adjacent woodlands continued into the 1980s but were never confirmed (for example by a photo or a corpse). Thorough searches of this locality in the mid-1980s for marten scats, using a technique pioneered in Scotland (Velander 1983), failed to produce positive results, although the reliability of this method has since been questioned.

The Vincent Wildlife Trust later began a nation-wide effort to record pine marten presence in England and Wales, interviewing observers where possible and assigning each sighting a confidence score on a scale of 1-10. Between 1994 and 2003 they collected 20 reported pine marten sightings in Derbyshire that featured a confidence score of 6 or more. One of these sightings was from the vicinity of Derwent Reservoir in the Upper Derwent Valley. Twelve of them came from the Crich-Holloway-Matlock area, notably a cluster of 10 sightings during 1996-1997, one in 1999 and another in 2003. There was also one sighting in the Goyt Valley in 1998, not so far from Rainow, Cheshire, also in the north-west Peak District, where a pine marten was reported in March 1992. The other six Derbyshire records came from widely scattered localities: Milldale, Breadsall, Chellaston, Bradbourne, Holymoorside and Stanton Moor.

The Milldale record was supposedly an animal dead on the road, but the body was not collected. All the other sightings are also unconfirmed; again no photo or corpse available. The best of the recent records rated 9/10 on the VWT confidence scale and concerned an animal seen in January 1997 in a tree in a Crich garden, watched through binoculars for 20 minutes at a distance of 40 yards. Three weeks later, the same observers enjoyed a second garden sighting, presumably the same animal, this time feeding on hawthorn berries. Another report referred to an animal seen several times foraging round dustbins at dawn and dusk on a caravan site near Matlock.

The Crich animal was by all accounts a genuine pine marten and some other recent reports also seem quite authentic, but some other sightings were brief – only a couple of seconds in one case – or referred to animals seen on the road at night. In the absence of corroborative evidence, and especially with fleeting sightings, there is always the possibility of misidentification or confusion, especially with stoats which do climb trees and have been observed as high as 40 feet up a larch on one occasion in the county.

There were two confirmed pine marten records in north Staffordshire in 2004 (Crawley et al. 2007). One was photographed in a tree at Consall in the Churnet Valley, not far from the south-west boundary of Derbyshire. A sighting on the Leek Moors was subsequently confirmed by DNA analysis of a scat. The latter site lies only about 10km south of the Goyt Valley.

VWT analysed and mapped all pine marten sightings in England and Wales between 1996 and 2003 that had a confidence score of 6 or more. The resulting map was acknowledged to be a rather simplified representation of pine marten distribution, but nevertheless showed six main concentrations of martens, one of them in Derbyshire, though centred on the mid-Derwent Valley, not the Peak District.

It is therefore unclear whether any pine martens currently exist in the county. A second question concerns the origin of any surviving martens. The three obvious possibilities are (a) they represent small relict populations; (b) they are animals dispersing south as Scottish populations expand; and (c) they result from escapes or unofficial releases. The only realistic possibility of long-term survival would be the Upper Derwent and adjoining woods of the Peak District. However, reports from these areas seem to have dried up. Furthermore, the whole area is well keepered and potential predators of red grouse are heavily controlled, so any surviving pine marten would have to be extremely cunning as well as lucky to avoid being accidentally shot or caught in traps set for foxes and stoats. It would stretch belief too far to suggest that a small population of martens might have somehow survived and been overlooked for more than 100 years in the woods of the mid-Derwent, especially in view of the fact that several of these woods have been cleared and replanted during that period.

The sudden flurry of sightings in this area in 1996-97 is consistent with either escapes or the arrival of dispersing animals. If such movements from Scotland take place on a regular basis, it is curious that so far none has been found killed on the Pennine roads (compare the number and radiating pattern of road-killed polecats found since they began to extend their range in England). It is also perhaps unexpected for wild animals that have traversed 300km of wild Pennine terrain to suddenly appear in a garden. This factor too may indicate captive origin (although pine martens are commonly seen on garden bird tables and feeding stations in Scotland). Several local naturalists have suggested that some local sightings may have originated from escapes by martens from the former wildlife park at Riber Castle near Matlock, though the managers of the collection at the time deny losing any animals.

Like most small wild carnivores, pine martens are rarely observed and difficult to detect through field signs, especially when living at low densities. Several recent research studies have shown that identifying carnivores by visual diagnosis of scats is unreliable, even by experts, and that DNA analysis of scats is the only sure way to confirm the species. This technique is being used by VWT on a new survey of pine marten presence in England and Wales. This survey is due to reach Derbyshire in 2009, and should provide some answers to the above questions.

Identification
Pine martens could be confused with the reddish-brown form of the mink, or even with stoats, which also climb trees on occasions. Pine martens are cat-sized, slim, red-brown or chocolate-brown in colour, with a creamy-white or yellowish chest patch, a notably bushy tail and quite prominent, pale-rimmed ears. The undersides are dark and there is no flank line.