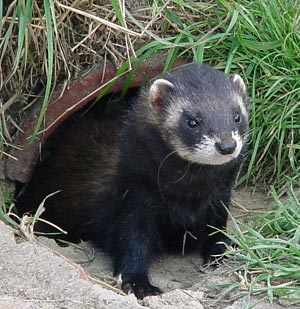 Formerly widespread but eliminated from the county by the beginning of the 20th century. The last definite record was from Bradley in 1900 (see Moyes 1994 for a historical summary of the polecat in Derbyshire). Polecats began to expand their range nationally from mid-Wales during the 1960s, spreading steadily into the Midlands. The first recent Derbyshire record was a road casualty at Church Broughton in June 1993 (Moyes 1994) and they have spread widely across the county since then. Early Peak District records came from Bamford (1994), Buxton and Tideswell (1998) and Hayfield (1999). Many road casualty records date from the period 2003-2006 and reflect both further colonisation and a greater intensity of reporting stimulated by national surveys organised by Vincent Wildlife Trust and the Mammal Society. Records include ‘pure’ polecats and hybrid polecat-ferrets. Some road casualties that were too damaged to identify with certainty were assigned to ‘polecat-ferrets’, so the total of pure animals may be slightly underestimated. Northern localities in the last 3 years include Longdendale, Dove Holes, Buxton, Wye Valley, and Calver. Recent records have come from a range of habitats including farmland, woodland edge, limestone dales and upland pasture. Polecats were reported on high moorlands, eg the Derwent Moors, in the 19th century but there have been few if any recent records from this habitat. Polecats and polecat-ferrets are expected to continue to expand, but the pattern of natural expansion may be partly obscured by releases of pure-bred polecats by ferret breeders (Moyes 1994).
[Old local names: foulmart, filimart].

More on the polecat in Derbyshire.