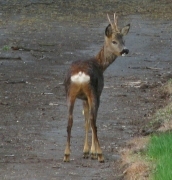 Native, but died out in Derbyshire in historical times. Roe deer have begun to recolonise the county as they expand their range nationally, from north and south. The main area of current distribution, and the only part of the county where they appear to be reasonably well-established, is in the north-east, with records from Moss Valley, Carr Vale NR, Doe Lea Valley, Scarcliffe, Barlborough, Whitwell Wood and several coalfield reclamation sites where tree planting has provided areas of suitable habitat. Occasional records in the Longdendale-Glossop area and around Hayfield and Chinley in 2006-7 probably originate from the small population living in Greater Manchester, close to the NW border of Derbyshire. There have been sporadic recent records from elsewhere, including the Upper Derwent valley (one dead on Win Hill in 2001) and the Snake Pass area. In early 2006, a roebuck turned up at Calke Park and was seen grazing with the fallow deer on several occasions since then. Another roe deer was recently photographed near Ashbourne by a camera trap. The spread of this attractive animal is likely to be welcomed by most naturalists but perhaps less so by foresters, on account of damage they can cause to young plantations.