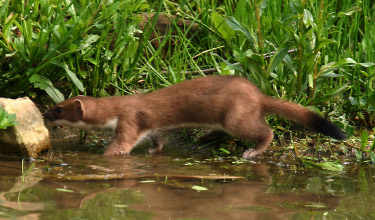 Widely distributed throughout the county. They occur in almost all habitats where cover and prey are found, though they are uncommon in built-up areas. Stoats are widespread on the Peak District moors, despite being controlled by gamekeepers, and they have been recorded up to at least 580m on Bleaklow.

Northern stoats turn white in winter, except for the tail tip, while southern populations remain brown. Derbyshire lies along the transition zone in UK for this feature and white, partly-white, and brown individuals can all be seen in winter. White stoats (ermines) or partly-white stoats have been recorded in Derbyshire between January and March, mainly on the northern moors, such as Longdendale, Upper Derwent Valley and Kinder Scout but they have also been seen at Carsington and as far south as Kirk Langley and Chellaston. About two-thirds of stoat sightings during Jan-March in north Derbyshire are of white or partly white individuals. Partly-white stoats have been seen on a few occasions; in February-March 2005 there were several sightings of a white and partly-white stoat in the Elton Common-Pikehall area.

Stoats are fierce predators and they have been observed killing both mountain hares and brown hares. One record of 5 stoats swimming together across an upland stream no doubt concerned a family group. Stoats may climb bushes and trees in search of prey and one has been observed 12m up a larch tree in the Upper Derwent Valley. In such circumstances they may be misidentified as Pine Martens, which are much larger and have a bushier tail. Stoats are larger than weasels and have a proportionately longer tail; this always has a black tip, which is the most reliable distinguishing feature. Film of a stoat family at Kedleston Hall taken by local wildlife film-maker John Keeling has been shown on the BBC.