Dormice were reintroduced to a site in the Middle Derwent Valley in 2003 by PTES as part of English Nature's Species Recovery Programme.

The county's first dormouse reintroduction needed 203 nestboxes to be put up. There was less than two weeks notice to organise this and the fifteen volunteers who turned up on the first day worked wonders fixing all the boxes in place.

Don MacPherson from Royal Holloway and Nida Al-Fulaij from the Peoples Trust for Endangered Species (PTES) brought the thirtyfour dormice. These came in individual nestboxes that were placed directly into pre-release cages. 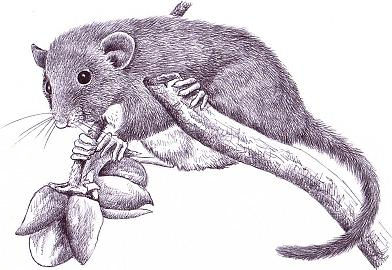 There was a ten-day feeding programme prior to release, after which on the 8th July the animals were released.

On 27th September, the nestboxes inside the pre-release cages plus 202 individual nestboxes were checked by volunteers, Dave Mallon and Steve Docker having licences to carry this out. The check revealed ten dormice in nestboxes (six original micro-chipped animals, three new animals and one that escaped as the box was being approached).

A second reintroduction in the county took place in June 2005 on the Chatsworth Estate, with a similar number of nest boxes and dormice. This is a much different site to the first one, being on limestone rather than gritstone and on steeper terrain.

Both sites are monitored by DMG. 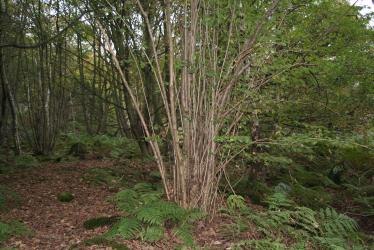 Drawing of dormouse by Laura Berkeley.