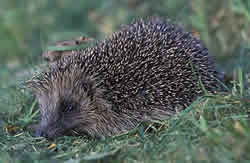 Hedgehogs are more commonly seen during the night as they rest in their nests during the day. They are commonly found within gardens, parks and on farmland.

As the hedgehog is an insectivore, its droppings consist of tiny insect fragments which appear shiny. Droppings have been described as having a sweet smell, with a hint of linseed oil.

Hedgehogs can often be heard snuffling when they forage for food. Puffing can sometimes be heard during mating.