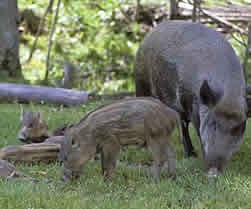 Native but long extinct. An attempt to reintroduce wild boars to the county in the 1820s proved short-lived. Two escaped individuals were present in the Crich-Whatstandwell area for a short period in 1985 and two more escapees were seen in the Derwent Valley in 2003/4. A few other scattered sightings of individual wild boar have been reported in recent years. Many escaped animals may in fact be so-called ‘Iron Age Pigs’ which are a cross between a Tamworth sow and a wild boar.