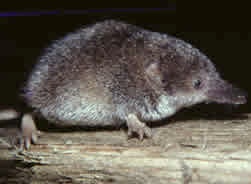 Native and widely distributed, though records are very sparse. It is believed to be seriously under-recorded but may be relatively uncommon. Pygmy shrews occur in woodland, scrub, grassland, wetland margins and moorland where there is adequate cover. Pygmy Shrews are much less numerous than Common Shrews based on results of small mammal trapping and recoveries from bottles and owl pellets. The Derbyshire Atlas database contains just over 3 times as many records for Common Shrews as for Pygmy Shrew. However, the evidence from long-eared owl pellets and the results of pitfall trapping in moorland show that they are more frequent on moorland, and blanket bog and at higher altitudes, than Common Shrews. They have been recorded up to 580m on Kinder (Clinging & Whiteley 1980). They are trapped significantly less frequently than the Common Shrew, possibly due to their light weight making it more difficult to set a Longworth trap for them. However, long-term DMG small mammal trapping data suggest that Pygmy Shrews are more likely to be caught on the second night of a trapping session so they may to some extent be trap-shy.

Pygmy Shrews remains have been recovered locally from pellets of 4 species of owl (barn, tawny, long-eared and short-eared). Like the Common Shrew, unmarked dead individuals are sometimes found. These have usually been killed by cats or other predators then found to be inedible. They are also vulnerable to becoming trapped in discarded bottles and cans. Any land-use changes that reduce ground cover impacts on their habitat.

Pygmy shrews climb trees and bushes and they have been found using dormouse nestboxes at both the local reintroduction sites, as well as bird boxes elsewhere. This phenomenon has been reported at many sites nationally, with about 6 times more Pygmy Shrews recorded in dormouse boxes than Common Shrews, suggesting that they are more arboreal, a habitat choice that may help to separate the two species ecologically.

This is the smallest mammal species in the county (and the UK), weighing 3-6g (less than a 10p piece). Like all shrews they are protected under Schedule 6 of the Wildlife and Countryside Act 1981.

In 2007, a few individuals with an unusual two-tone colour pattern were found: light brown in front and dark brown on the rear half, with a clear dividing line (see photo) presumably the result of differential moulting.