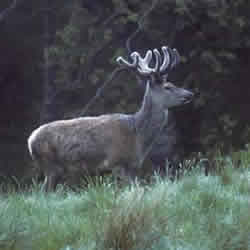 Native and formerly widespread. Became extinct in the wild state apparently by the beginning of the 18th century. Current presence is derived from escapes from deer parks. Much prized for hunting and preserved in Royal Forests during Norman and Medieval times, especially in the Royal Forest of the Peak. Numbers declined as agriculture encroached on the royal forests and the Forest Laws weakened. Many Peak Forest deer died in heavy snow at the beginning of the 17th century and a further decline in numbers followed the dissolution of the Royal Forest in the middle of the 17th century. Red deer became extinct in the county as a wild species some time thereafter.

Red Deer have been preserved in deer parks. Chatsworth was enclosed in the early 15th century and the deer present there since then may be descended from the original Derbyshire stock. The deer at Lyme Park, just outside the NW county boundary, and also enclosed at around the same time, may also contain original stock. However, several introductions of red deer from Europe have been made nationally so it is possible that parks contain mixed genetic stock. The Victoria County History referred to a few hybrids between red deer and wapiti (a North American subspecies C. elaphus canadensis) at Osmaston Manor, descendants of 20 animals brought there from British Columbia. Red Deer are no longer kept at Osmaston Park.

At present, two populations, both derived from escapes from deer parks, have become established and are of relatively recent origin. One is centred on the Goyt Valley south of Whaley Bridge. The origin of the deer is not known for certain but they probably escaped from Lyme Park, This population is subject to some culling by the Forestry Commission to control their numbers and expansion. A second population, numbering about 50, is found on Big Moor above Baslow, presumably with its origin in escapes from Chatsworth.

Recent sightings have also been made around Risley Glebe. Vagrant red deer also occur widely and may be seen well away from known populations. For example a young stag was present in Londgendale in winter 2004-2005 and other individuals have been seen at Pikehall and other widely-spaced localities.

Park herds can be viewed at Chatsworth Park and Calke Park while smaller private herds are kept at Alderwasley Park and other estates. Red deer occurring outside Derbyshire, but close to the county boundary, and thus representing a potential source of escapes or colonisers, include the feral population in Wharncliffe Woods west of Sheffield and park herds at the National Trust-owned Lyme Park in the north-west Peak District, Donington Park on the Leicestershire-Derbyshire border, and Sherwood Forest.