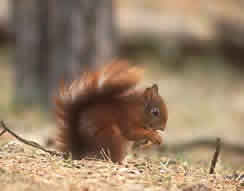 Native and formerly widespread, but declined steadily over the last 50-60 years along with the expansion of grey squirrels and became extinct in the county during the 1990s or early 2000s.

The Victoria County History said they were generally distributed and exceedingly common where protected. Glover (1829) noted that they were numerous at Kedleston.

Only the broad outlines of the decline are known; these show a quite rapid decline from south to north between the 1960s-1980s. Records show that red squirrels were still found in the north, the north-east (e.g. Linacre Woods), mid- and south Derbyshire in the 1960s. By the end of the 1970s they had gone from the south, the NE and mid-Derbyshire, remaining only in parts of the Peak District. By the end of the 1980s they disappeared from the White Peak (with the latest records from Chee Dale and near Taddington), leaving the last stronghold in the Upper Derwent Valley. Numbers here dwindled through the late 1980s.

An extensive trapping survey in this area was carried out by the Institute of Terrestrial Ecology in 1990. They managed to trap the same female three times, while catching over 100 grey squirrels in the same area. The authors of the study concluded that there was no viable red squirrel population remaining in the area. One threat at the time was the expanding population of goshawks (Accipiter gentilis), a rare raptor that can prey more easily on reds than on grey squirrels. A further complication lay in the priority status of upland oak woodland which prevented manipulation of the habitat to favour red squirrels by felling oaks in favour of conifers. This was a good example of the difficulty in assigning biodiversity priorities among three competing interests.

The last county records relate to individuals seen in the Upper Derwent Valley during the mid-1990s. These include one brought to its nest by a goshawk in 1994. The disappearance of red squirrels from this part of the Peak District and the adjacent Sheffield area was detailed by Whiteley (1997).

Although sightings of red squirrels have occasionally been reported since then, including near Holmesfield and Chee Dale (2008), none so far has been confirmed as genuine. It is likely that these sightings were misidentified reddish-coloured grey squirrels or even stoats. One genuine red squirrel did arrive in the generally treeless environment of South Head Farm, on the south-west side of Kinder Scout in July 1998, and spent a couple of days around the farm buildings before getting into the kitchen where it was killed by a dog. The skin was later handed over to Derby Museum. This animal turned out to have escaped from the Chestnut Centre, which lies 3.5km away over a 450m moorland ridge.

There is no realistic prospect at present of red squirrels being restored to Derbyshire or of natural recolonisation from the nearest wild colony - the isolated population at Formby on the SW Lancashire coast. This population was affected by the squirrelpox virus in 2008 and its future is anyway under threat.

During the 19th and 20th centuries red squirrels from continental Europe were released into several parts of Great Britain. It has been reported that red squirrels were at one time released at Chatsworth that black individuals had been sighted there (Branson 1996). This implies the origin was continental stock, where the melanistic form is relatively common.