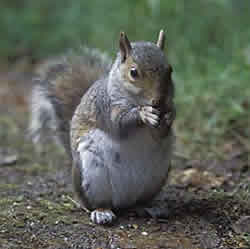 Introduced to the UK from North America from about 1876-on. Now widespread and common. The earliest recorded sighting in the county was by Sir Vauncey Harper Crewe who noted “American grey squirrel near Melbourne in 1906…no doubt escaped.” This appears to have been an isolated occurrence as the next records date from 1944 when a few were seen in north Derbyshire. These may have originated from early releases in east Cheshire [the first recorded UK release was at Henbury near Macclesfield in 1876) and other locations in east Cheshire, not far from the county boundary. Grey squirrels spread very rapidly since then and along with rabbits, they are perhaps the most familiar mammal in the county. Grey squirrels occur in all types of woodland, isolated copses, parks, gardens and urban areas. Their ability to exploit small patches of trees, shelter belts and hedgerows, and to cross open ground in order to reach them, has greatly aided their spread. There are several reported sightings of grey squirrels in open moorland, including one near the trig point on Kinder at 600m and they have also been seen hopping through Molinia-dominated marsh. Grey squirrels are frequent and often unwelcome visitors to bird tables where they show a high level of persistence and ingenuity in gaining access to bird feeders. They cause damage to trees by chewing bark and shoots and raid nests of small birds fro eggs and young. As a result they are controlled by foresters, gardeners and gamekeepers.

Most records are from sightings or the characteristic dreys; some are killed on roads. They are preyed on by foxes and goshawks (which have a very limited distribution in the county).

Grey squirrels can show brownish or reddish tints in their summer coat which can lead to optimistic reports of red squirrels. In winter they appear more silvery-grey.