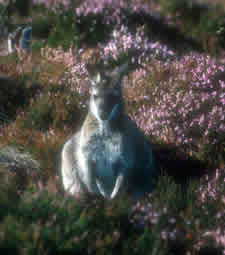 The well-known feral population on the moors of the Staffordshire Peak District became established around 1940. Animals occasionally wandered north and northwest across the Peak District into Derbyshire, with records from the Goyt Valley (1940), Hindlow and Harpur Hill Quarries (1951), Barmoor Clough near Chapel-en-le-Frith (1944), Burbage (1954), Yorkshire Bridge, Ladybower, (1955), and Chapel-en-le-Frith again (1956) (Yalden & Hosey 1971). Forestry workers in the Goyt Valley reported occasional sightings in the early 1960s and there were further very infrequent reports from the Goyt valley area through to 1990. All these occurrences appear to have been short-lived and relate to single animals; there are no reports of either breeding or long-term presence in Derbyshire. A wallaby killed on a railway line near Ashover in 1963 or 1964 probably originated from another collection (Yalden & Hosey 1971). Wallabies that escaped from a small private collection in the Holloway area in the 1990s were seen locally for a short time.