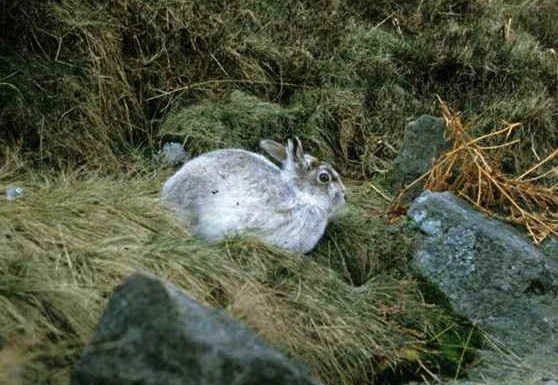 Native but appears to have died out around 6000 bp, as scrub and woodland expanded northwards in the post-glacial period. The present population is descended from releases in the northern Peak District made for sporting purposes around 1870-1882. They spread widely and have since become an established feature of the Dark Peak moorlands, a familiar sight to hikers and walkers. This is the only population of mountain hares in Great Britain, outside Scotland and a small introduced population on the Isle of Man. Numbers have been rising for over 30 years.

An unknown number were released onto the North Staffordshire moors in 1894 and may have reached the moors south-west of Buxton, but died out after about 20 years. A population that appeared on Eyam Moor in 1927 is no longer present.

The Derbyshire distribution extends from Black Hill at the northern limit of the county, south across Crowden, Bleaklow and Kinder, and east to the Howden and Derwent Moors. A survey of the Peak District and adjacent South Pennine moorlands in January-May 2000 recorded 1385 mountain hare sightings in 332 1-km squares and records of tracks and/or droppings only in a further 19 1-km moorland squares, a 35% increase on the distribution in 1984. The number seen (944) on the 2000 survey also shows an increase on the 1984; estimates of the total population range from 1500-5000.

The population had certainly declined sharply by the end of the 1960s, principally due to high mortality during the severe winter of 1962-63 (Govett 1964; Yalden 1971). The continuing increase since then, confirmed by the 2000 survey, has presumably been aided by the recent run of mild winters.

Mountain hares often lie up among rocks, shallow heather, clumps of bilberry or crowberry, in runnels, between tussocks of mat grass and in the open on the side of a peat grough or under a peat hag. Such sites invariably offered shelter from the wind and an extensive view. They also use forms in heather, enlarged by biting off the stems. They also use tunnel-like forms between clumps of hare's-tail cotton grass (Eriophorum vaginatum); these sometimes have a soft white lining on the inside, showing regular use. Mountain hares are occasionally seen in shallow burrows or hollows scraped out of peat and snow. A few longer burrows, some exceeding 1m in length, can be found in the sides of peat groughs or streams. These have a flattened and well-marked 'seat' at the entrance, usually lined with white fur, and are marked by well-trodden paths leading to and from the entrance. On one occasion a mountain hare was disturbed when lying up in a bed of soft rush and on two occasions in bracken.

Severe winters appear to be the main threat, and it has been suggested that the damper climate and wet summers of the British Isles could be a problem. Peak District mountain hares were hunted with packs of hounds until hunting with dogs was made illegal. Casual hunting using lurchers still continues, but the extent of the issue is not known. They are no longer shot as game, though shooting to keep numbers down goes on some moors. Moorland fires are a potential threat and heavy recreational use of the most popular areas might cause some disturbance. Many are killed on the road each year, especially the Snake and Woodhead Passes and the Holme Moss road.

The main natural predator in the Peak District is the fox. Golachowski (1994) found lagomorph remains in over half of 50 fox droppings collected on Snake summit and Saddleworth Moor. Although it was not possible to distinguish between rabbit and mountain hare fur in the scats, the altitude and habitat where they were collected make mountain hare by far the more likely species. Stoats have also been filmed attacking and killing an adult mountain hare.

Mountain hares are listed under the EU Habitats Directive as 'a species of community interest whose taking in the wild and exploitation may be subject to management measures'. They are listed as a 'species of conservation concern' in the UK Biodiversity Action Plan and as a Significant Species in the Dark Peak Natural Area. More than 95% of the Peak District range lies within the Dark Peak SSSI and Eastern Peak District Moors SSSI, which also within the South Pennine Moors Special Protection Area (SPA).

Mountain hares are smaller than the brown hare, weighing 2.5-3.1 kg (compared to 3.2-3.4 kg for brown hare). Females are slightly heavier than males. The summer coat is brown or grey-brown with white undersides, this often clearly visible on the feet and lower flanks until well into the summer. Ears are black-tipped and shorter than those of the brown hare. Peak District animals begin to turn white in the autumn and most are white by December. They begin to moult back into their summer coat in March and are predominantly brown by April-May. Progress of colour changes in the Peak District was described by Clinging (1982). The moult into winter pelage is initiated by day length and then influenced by temperature.

They are unmistakable in winter. In summer, the all-white upperside to the tail is diagnostic (brown hare has a black centre to the tail). Also distinguished from brown hare by smaller size, shorter ears and plain brown or grey-brown coat, compared with tawny-brown of the brown hare.