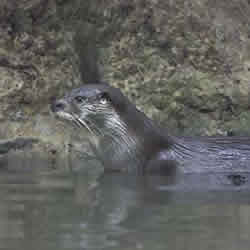 Native. Disappeared from Derbyshire by the 1960s-1970s. A subsequent national recovery saw them slowly recolonise many areas of former range and they reached Derbyshire by the early-mid 1990s. Otters now appear to be established on the Trent, Dove, lower and mid-Derwent and their tributaries and there have been several recent records from the River Wye. Records from the Upper Derwent and the Goyt are more sporadic. Signs of otter presence have been found on quite small streams as well as the larger rivers. Otters killed on the road have sometimes been found a long way from the nearest river (e.g. near Bradwell in 2007, Burbage near Buxton in early 2008) so animals are still dispersing and spreading. Dead otters have also been found in 2003 just over the county bounty in Cheshire and very close to the National Park boundary in West Yorkshire, so recolonisation from both the NW and NE as well as the south is certainly possible. Artificial otter holts have been constructed at suitable sites to encourage breeding and Derbyshire Wildlife Trust’s Water for Wildlife Project operates a county-wide otter monitoring programme. European otters and other species could until recently be viewed in captive conditions at the Chestnut Centre near Chapel-en-le-Frith, but this has now closed.

More on otters in Derbyshire