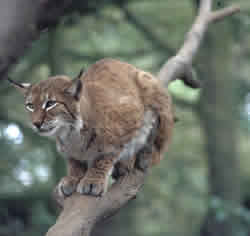 The archaeological record, in the form of bones recovered from limestone caves, shows that the Eurasian lynx (Lynx lynx) formerly occurred widely in Great Britain. The conventional view was that it became extinct in the Mesolithic period, 5000-6000 years ago. However, recent research based on advances in radio-carbon dating techniques, indicates that this is not the case and that lynx in fact survived into historical times, and even until the post-Roman era.

Lynx bones have so far been reported from 25 sites in Great Britain. Five (20%) of these sites are located in Derbyshire. Four of the county sites are on the Magnesian limestone of the northeast: Steetley Cave, Langwith Cave, Robin Hood Cave and Dog Hole Fissure (the last two both at Creswell Crags). The fifth is Cales Dale Cave, in the upper part of Lathkill Dale, on the Carboniferous limestone of the White Peak. A sixth site lies nearby in the White Peak, at Lynx Cave on Beeston Tor in the Manifold Valley, Staffordshire. The high proportion of national lynx remains in the area is more likely to reflect the presence of limestone, and therefore caves suitable for preserving animal remains, rather than an ancient concentration of lynx in the county. Only one of the Derbyshire remains has been carbon-dated. This is the bone from Dog Hole Fissure which has a date of around 9600 years BP (before present).

The latest known British specimens originate in the Craven area of the Yorkshire Dales, which has produced 9 of the 25 known British lynx remains. Two lynx bones from Craven have been radio-carbon dated at 1850 and 1550 years BP, that is 150 and 450 AD respectively, and far later than previously thought. Some linguistic and literary evidence suggests that lynx were still being hunted in the Lake District in the 7th century, and were present in Scotland until the late Medieval period. Given that Craven lies not far north of the Derbyshire boundary, and at a generally similar altitude, it is quite possible that lynx survived in Derbyshire until much later than the date suggested by the Creswell bone.

On current evidence, the lynx certainly became extinct in Britain well before the bear and the beaver, and a thousand years before the wolf. It has often been suggested that climatic changes were responsible for the disappearance of the lynx, while some people have advanced fluctuations in mountain hare populations as a possible cause. It now seems more likely that a combination of wide-scale deforestation, hunting of deer, and persecution were the most likely cause of the demise of the lynx. Britain lost a larger proportion of its forests, and at an earlier stage, than the rest of northern and western Europe.

As a ‘native’ species, lynx are a potential candidate for reintroduction. While it is virtually impossible to imagine lynx returning to Derbyshire under current circumstances, several proposals have been put forward for an official reintroduction to Scotland, where experts confirm that ample suitable habitat and prey numbers exist.

In a paper in Mammal Review, Dr David Hetherington of the University of Aberdeen and colleagues4 present the results of an analysis of potential lynx habitat in Scotland. They conclude that there is about 15,000 sq km of lynx habitat in the Highlands, with a further 5,000 sq km in the Southern Uplands connected to about 800 sq km in England, centred on Kielder Forest. Based on prey availability, they also estimate that the Highlands could support a population of about 400 lynx and the Southern Uplands about 50. This would represent the fourth largest lynx population in Europe, based on current figures.

Sadly, formidable obstacles would have to be overcome, as is clearly demonstrated by the ease with which a few big landowners have succeeded in thwarting the long-planned and widely-supported reintroduction of beavers to Scotland. On the other hand, a few wealthy landowners have put forward ambitious plans to reintroduce lynx, alongside other extinct species, into huge fenced estates in Scotland, so there is some cause for hope.