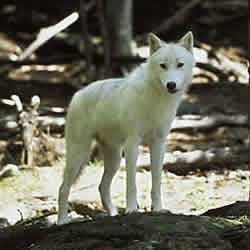 Native but long extinct. Wolves were widespread up to the early medieval period, and seem to have been most numerous, and survived longest, in the Royal Forest of the Peak. In 1586 William Camden wrote “There is no danger of wolves now in these places, though infested by them heretofore.” Wolves are said to have died out or during the severe winter of 1490-1491.

The Victoria County History provides a few interesting details: a colt and 2 sheep were reportedly killed in Edale by wolves in 1255-56 and there are references to wolf trapping in 1286. Henry II sent two wolf trappers from the Peak Forest to catch wolves on his estates in Normandy in 1167-68. A John le Wolfehunt held land in Wormhill at the beginning of the 14th century in return for trapping wolves in the Royal Forest. There were ‘wolf pits’ on Abney Moor, at Bakewell and Priestcliffe. Their former presence is commemorated in a few place names e.g. Wolfscote Dale and Wolf Edge on the Staffordshire Moors.